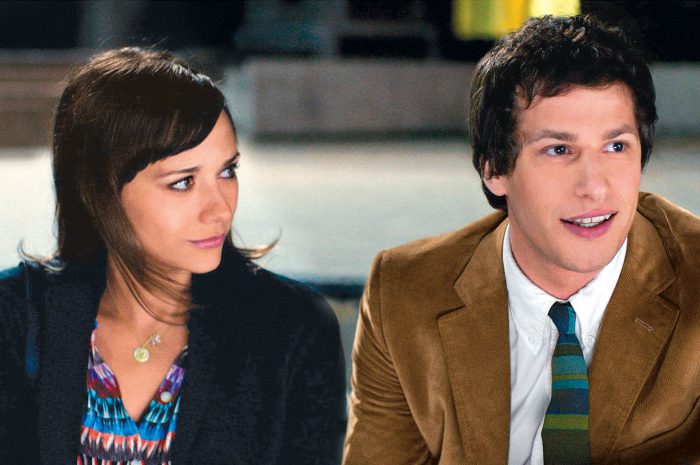 On a particularly dull afternoon, I asked some friends if they had any film recommendations that would, specifically, “culture” me. TV shows had been taking up my summer thus far. As I racked up a plethora of titles from cult classics to Netflix specials, Celeste and Jesse Forever stood out to me. Soon enough, it was the first in the list I watched. But why? Romantic comedies had never wildly appealed to me, nor did I find solace in them in times of implicit heartbreak. Corny lines were funny to me in ways that are not intended. But this one, with a 71% on Rotten Tomatoes, starred Rashida Jones and Andy Samberg. And, to hark back, TV shows had been taking up my summer thus far – so seeing Karen from The Office and Jake Perralta from Brooklyn 99 together for 90 minutes? I was set for a not-so dull evening.

Romantic comedies, of all the genres, have perhaps the most cliché of clichés: dreamy love songs, the wise gay friend, and (based on how optimistic you are) an unrealistic ending. Celeste and Jesse Forever is known by film critics as the romcom that attempted to “subvert the genre”. It starts off with the classic cute montage of the stars, followed by a smooth transition to them singing in a car. They are undeniably cute, sprinkled with inside jokes and I love you’s. Soon after, Beth and Tucker, the two’s engaged friends, are introduced along with revelation that Celeste and Jesse’s are in fact split up. It’s been six months since, a divorce coming soon!, and their relationship is as infuriating as can be. We meet Elijah Wood, the trying-to-be flamboyant gay friend, Emma Roberts, an archetypal pop star, and Chris D’Elia, playing a minor but, in my opinion, remarkable role. Around the indefinite-minute-mark, an incident between Jones and Samberg gets the rising action rolling.

Celeste and Jesse Forever have a soundtrack that not only subtly sets the tones for very distinct moments, but just sounds good on its own. Starting with Littlest Things by Lily Allen, the mood is instantaneously arranged; her lace voice in E minor atop nostalgic drums already tug at our heartstrings. The beats playing behind vulnerable talks and drunken banter are worth a listen during your own wisps of personal reflection. My earphones broke halfway through the movie, and the background layers of audio were the only thing playing through. However, the bother wasn’t tremendous — The music paired with the gentle cinematography resulted in a visual massage of sorts, worthy of indie music videos.

Touching on cinematography, it was incredibly utilized. Perhaps I had been wired to the choppy swirling cuts of comedy shows, but the cameraman of Celeste and Jesse Forever knew precisely what they were doing. Jesse’s abrupt conversations with Celeste drip with drama but is exhibited with simplicity: close-up shots of their faces in a suddenly dimmer color grade tell the audience infinitely more than what their lines can. There is a continuity kept in mind. When shooting Celeste’s morning routine, and as the second morning comes about, a vital piece is noticeably missing. The efficiency in these subtleties tie together what easily could have been a bland, undercooked, under seasoned dish of a film.

What is overall agreed upon amongst most reviews I’ve read is that the characters essentially made the film. The contrast between Celeste and Jesse are evident, with her in an art gallery and him crying to a wrestling match. She is analytic and organized while he is artistic and haphazard. Beth grounds Celeste, a yogurt employee is talkative on a date, and stoners serve the brave purpose of comic relief. Diverse personalities curates compelling connections, as the audience gets to experience lax yet genuine character development. Despite the aforementioned stoners serving us laughs, each character has idiosyncrasies that entertain us beyond the drug abuse. The comedy bit of a romantic comedy is fulfilled.

But analysis is boring! We watch movies, stream shows, and generally consume art in order to feel something. Though Celeste and Jesse Forever is definitely not groundbreaking, like Mean Girls with its iconic characters and Pulp Fiction with its raw ingenuity, it most certainly makes for a good time. The characters are lovable, the motives true to life, and the lines annoyingly cliché enough to make you go, “Well, that makes sense.” It is a romantic comedy that intertwines the quips of cliché with the anchors of real life. Personally, I would rate it a ⅘, with a solid point dedicated solely to the cast.