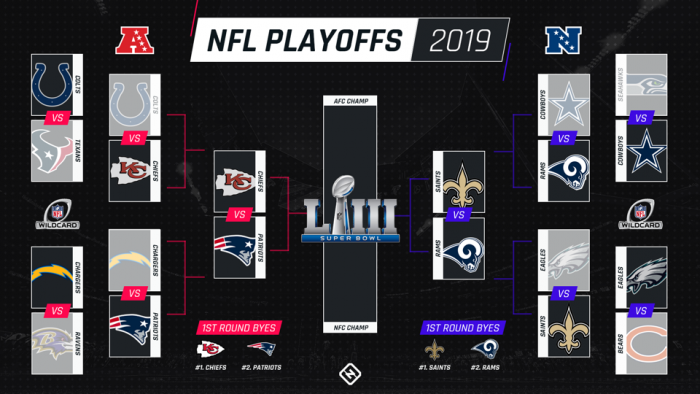 The Divisional Round of the NFL playoffs is set to take place this weekend, and for the teams that survived the Wildcard Round, it’s time to see what they’re really made of.

In the NFC, the defending champions Philadelphia Eagles are still in it looking to repeat a championship year. They survived last week after a push of luck as the Chicago Bears kicker Cody Parkey missed the game-winning field goal in the fourth quarter in their Wildcard games. With an injured quarterback Carson Wentz, back-up Nick Foles has taken charge as he did last year when they won the Super Bowl. They advance to face the New Orleans Saints in Louisiana.

Their opponents, the Saints are the team to beat in the NFC. Although they lost their first game of the season, they then went on to a 10-0 run that proved that they are one of the most efficient offenses in the league. In addition to that, they have one of the best backfield with Alvin Kamara and Mark Ingram sharing time at running back.

One of the teams in the other matchup in the NFC is the Dallas Cowboys. They are most experts’ “Dark Horse” team to make a run to the Super Bowl because of their unbelievable pass rush defense and their smash-mouth strategy of downhill running. This is a very old school approach and I look forward to seeing what they have up their sleeves for the Los Angeles Rams.

The Rams are one of the most creative teams when it comes to offense due to their mastermind coach Sean McVay. Sean McVay has led his team to a 13-3 record securing the two seed behind the Saints. Another reason they have a powerhouse offense is running back Todd Gurley. Gurley has been proving himself as one of the best running backs in football over the last two seasons and it doesn’t look like he’s stopping anytime soon.

Going over to the AFC, we get to a young aspiring second-year quarterback Patrick Mahomes leading his Kansas City Chiefs team. He is coming off a phenomenal year as he leads all quarterbacks in touchdowns (50) and one of two quarterbacks with 5000+ passing yards this season.

The quarterback with second most touchdowns (39) will be his opponent as Andrew Luck looks to have a big upset in Arrowhead Stadium by leading the Colts to victory. The Colts are one of the more overlooked teams but their offensive line is nothing to sleep on. Newly acquired Quinton Nelson made a quick household name for himself by helping to make this offensive line go from one of the worst offensive lines in the league to one of the best.

For the Los Angeles Chargers, one of the most passionate quarterbacks ever are trying to lead them to victory at Gillette Stadium, home of their opponents, the New England Patriots. Their quarterback, Philip River is due for a Super Bowl appearance, let alone a ring after 14 years in the league,. The Chargers have what it takes but will they pull through.

Facing the Chargers is who may be known as the greatest of all time or “The Goat” is Tom Brady and the New England Patriots. Tom Brady has led his team to 5 Superbowl championships and 8 super bowl appearances. The Patriots have a reputation of constantly winning due to Bill Belichick’s success with Tom Brady. They have won AFC East for ten years straight and are looking for vengeance after last years lost to the Eagles.

Get to Know Some of Hudson Catholic’s Student Musicians