The Great American Race for Approval 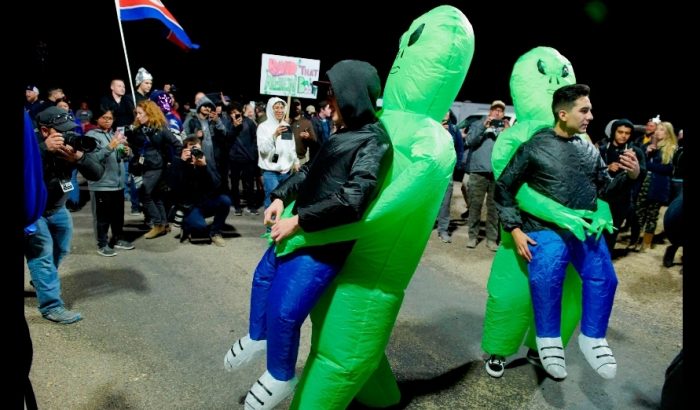 by Connor McCall and Juan Teira

If you have been updating yourself on the news, you know that the area 51 “raid” recently occurred (which can be hardly considered a raid because nothing was raided). This event was popularized on Facebook, and reports estimate that over 2 million people signed up to attend—note: 2 million people did not actually go to the event, but more like one hundred people instead.

While it was all rather harmless, but it illustrates how powerful the internet is in influencing teens to participate in dubious events and even dangerous “challenges.” Such challenges and internet trends, like the “tide pod” and “bird box” challenges, have killed and hospitalized many young adults.

It has come to the point where we must question why teens would harm themselves just to complete such stunts?

With the dominance of social media in recent years, it has become increasingly apparent that many teens are looking to gain something from others. The reason for this is because they either do not receive enough praise from their friends and classmates in real life and are looking for approval, or they believe that they need to build up their online reputations.

As reported by Nick Whigham, child researcher Dr. Kristy Goodwin explains teens’ use of social media as a means of achieving a sense of connection.

“‘Social media caters to so many of our basic needs to feel connected and competent,’ Dr. Goodwin said. ‘Because we’re humans and we want to feel like we’re connected there’s almost a sense of allegiance. If I emulate what others are doing, I’m fitting in.’”

This emulation of other people’s actions is a dangerous substance to put in front of a developing teen who does not fully comprehend the consequences of their actions.

It seems as time moves on, these challenges become increasingly crazy and sometimes even barbaric. Is this mainly because of generational trends or is it because of social media and teens just going along with it? It seems like both of these things contribute to why young adults do these things.

Social media is not the main contender of this ongoing problem, but it is also because of ill-advised teens performing these foolish acts. That is not to say that all young adults are about as smart as bait as there are countless young adults who stay on the right path and know not to participate. But what about those who do?

Is a lack of intelligence to blame? A psychology professor at the University of Amsterdam, Jan de Nijenhuis, has calculated that we have lost a total of 14 IQ points since the Victorian Era. Perhaps more teens would stop doing these challenges if they were more educated on the dangers of the challenges and if they actually thought it through more critically before they went along with it.

Education is the key. In order to stop teens from participating in these dangerous challenges, they need guidance on how to approach social media and online trends. Additionally, parents should monitor their children’s online activity to see if they are putting themselves in some form of danger.

As time moves on, technology becomes more advanced, and that means people are able to get the word out a lot faster. While this is not always a bad thing, it does mean that if there is a new, asinine challenge, you better believe that people will get on it.