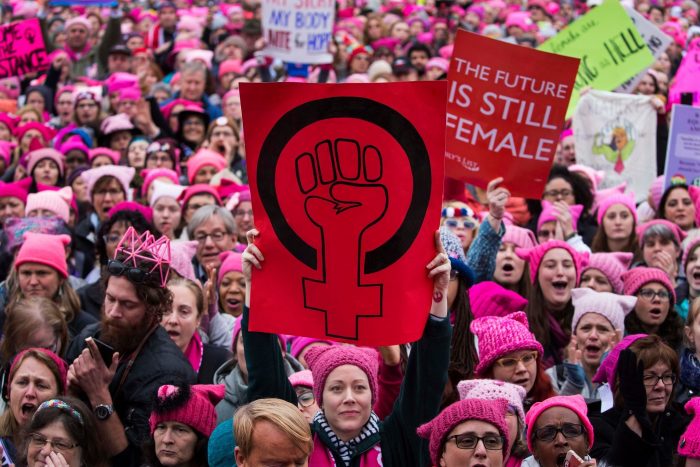 On Saturday, January 20th, 2018, millions of marchers gathered in some of America’s largest cities in solidarity of recent movements and protest of Pres. Trump’s administration. The vast crowds and cunning signs televised a year ago on this day, were once again replicated on the anniversary of Pres. Trump’s inauguration. People from young to old, black to white, rich to poor, unified in the name resistance and change. Carrying signs that ranged from funny to bold, these demonstrators didn’t hold back as they took their voices to the streets.

Cities such as Los Angeles, CA, and New York City, NY, saw the biggest crowds with 600,000 and 200,000 marchers respectively. Thousands also showed up in cities such as Chicago, Philadelphia, and Washington D.C. The outcome is a direct result of recent progressive political and social movements, the #MeToo being a prime example of the way women are speaking out against injustice and gender-based crimes.

But the Women’s March wasn’t solely about women empowerment, it also heavily focused on race and immigration issues currently facing our country. Defenders of DACA were seen protesting Pres. Trump and the GOP’s recent efforts to eliminate the policy. DACA is an immigration policy that allows for about 800,000 Mexican-American immigrants to stay in the United States of the grounds of education. Repealing this policy would essentially put the livelihoods of these students at risk, as they will be forced to live in a foreign country which most of them have never visited.

Many social reforms were showcased at the Women’s March some of which included the Black Lives Matter movement, reproductive healthcare for women, environmental awareness, and social justice for women who are victims of sexual harassment/abuse. But among these, the one point stressed the most was the importance of voting. Signs such as “Girls Just Wanna Have Fun-Damental rights” and “Power to the Polls”, expressed these very sentiments.

Public figures and various artist also joined the crowds at this year’s marches. Natalie Portman, Cher, and Eva Longoria were just some of the high-profile names who brought further attention to the movement. Scarlett Johansson and Whoopi Goldberg were only two of the many who gave impactful speeches on this day. Johansson is speculated to have called out actor James Franco amidst sexual assault allegations after showing support of the #TimesUp movement at the Golden Globes just prior.

“I want my pin back, by the way,” Johansson said, possibly referencing the #TimesUp pin Franco wore at the Golden Globes. Franco has since denied said allegations.

As for the motive for showing up a second year was simple- these people were fighting for things that mattered. Among the seemingly never-ending faces present were women, men, and people of scattered backgrounds all marching in solidarity for change and a desire for America to better itself.

The want for change was a common view among marchers, 32-year-old nurse Vanessa Medina, was one of the thousands of demonstrators in NYC that felt this way as well. Medina, who resides in Clifton, NJ, mentioned the #TimesUp movement and the GOP’s efforts to defund Planned Parenthood as reasons for showing up. Her 11-year-old daughter, Xenaya, shared her mother’s thoughts as she said, “ I want equal pay. And equal rights.”