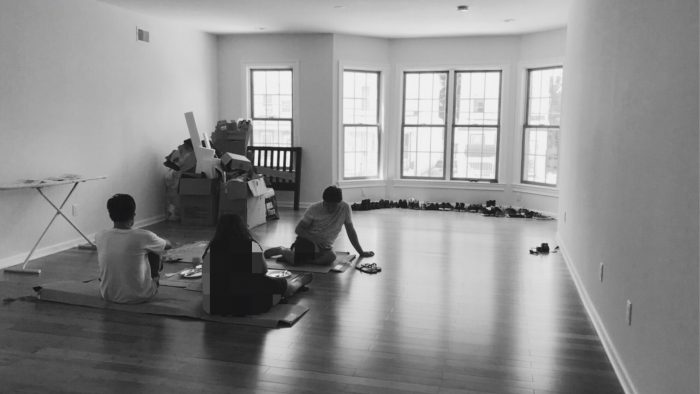 Sat on the floor of their new home, the family ate. As their voices softly echoed, harmonizing with the tinkering forks and spoons, the walls of the house yawned. It had been quite a while since it had been occupied, and the new tenants looked promising. They had lined their shoes by its windows, of which crisp blinds were to arrive for. Sun rays glinted on the newly mopped floors. Eager to play interior designer, the mother spoke of how she would decorate the space: I was thinking, our purple couch? Right here. Dining table? Over there. Bookcases… will we get new ones? I want large ones. Kids? What do you think?

Sat on the floor of their new home, the family ate. The neighborhood had been extremely welcoming, streets swimming with smiling faces and the local laundromat filled with friendly good-mornings. With the kids chewing while listening, the father told them keenly about how we had a Louisiana Chicken two streets down! (They had it for dinner the next day.) Along with that, there was a Dairy Queen, dollar pizza stores, actual dollar stores, numerous nail salons to the daughter’s pleasure… Without a doubt, it would take some time to settle in.

Sat on the floor of their new home, the family ate. The tables and chairs hadn’t arrived yet, nor any of the other furniture. The others were expected to arrive several weeks from now. What they did have were cardboard boxes from early shipments, which, thanks to the father, were neatly fashioned into the likes of fine Japanese dining. It was a bit of an ache to the lower back, but there is always some sort of freshness in the lack of conventional comfort; meals were intimate and conversations were curious. As the meal finished up, the family wondered. What will America bring? Who will we meet? They began to put their plastic plates away. Who will we become?

Fiction: “You Are Now One of Us”