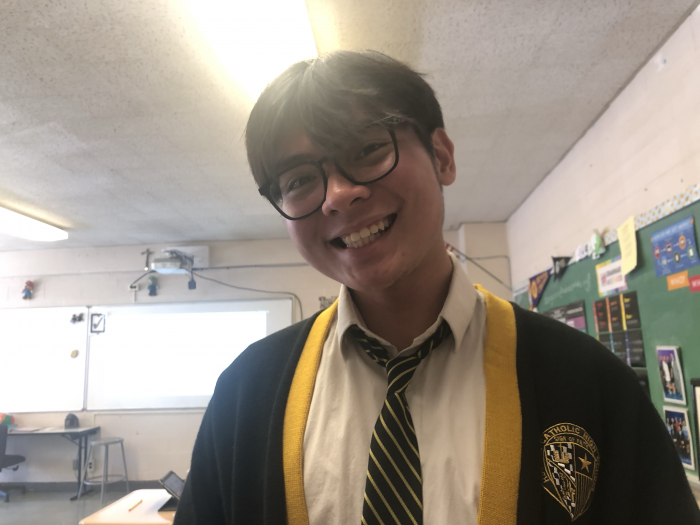 To be smart, you have to be curious.

The Commentator took the time to sit down and interview one of the friendliest international students we have, Phuc Nguyen or Aiden Nguyen, from Vietnam. I, senior Elizabeth McDonnell, wanted to see deeper into the life of someone studying abroad in our school.

When asked why he decided to come to the United States, he replied jokingly, “Because I wanted to” with a laugh.

After explaining the basic reason for moving to a foreign country, he moved on to why he decided to go to Catholic school. He said, “The reason I went to a Catholic school was to learn new things, a new culture. I wanted to make friends, make more friends, you know.”

I asked if he had friends in Vietnam. In response, he said simply that he does. Wanting more information on his friends, I asked if he missed them. He answered with a no and we laughed at his bluntness.

After finding out why he came here, the next thing I wanted to know is when he came. Unsure, he replied, “When? Uh, in 2016 or 2017. I forgot… 3 years ago I think. I was studying in New York. The reason I changed to Catholic School… Well, I told you that already.”

I was surprised to hear he went from New York to New Jersey. Most people try to get away from New Jersey, so I asked if he liked New York. He replied, “No, it was too dirty.”

Now, with all the background information I needed, I asked him about the differences in culture here compared to Vietnam. He replied, sadly, that the major difference was New Year’s, since he’s not with his family.

Seeing he was upset, I changed the topic. I asked about the people in Vietnam and how they compare to the United States. He stated, “In my country they are kind of annoying and disrespectful. But here it’s better, like you,” and we laughed at his last comment.

I thank him and proceed to ask about adjusting to the American lifestyle. His reply was, “Actually it is easier. To move from Asia to America is easy, but to move from America to Asia is hard. For example, about school stuff and schedule, my school would start at 7 am and finish at 5pm. Like 10 hours a day. I would have to study more when I got home. So here is easy. Also, the time difference is big. The first day I got here, I got jet lag. I was tired. Also, English! I don’t understand all English and I speak with an Asian accent.

His answer shocked me, so I asked if he still wants to be alone and he responded with, “Yeah, but I wouldn’t have family or money. No money to rent a house or buy my school stuff. To live without family is hard, but I want it.”

Wanting to know more, I questioned what aspects of life are hard without family. Aiden responded, “No one wakes me up and no one cares about me.”

Touched by the statement of not having anyone to care for him, I asked if he gets lonely. He contemplated this for a moment and eventually responded, “Sometimes, but I got friends, so it’s fine. I have friends.”

Moving on, I asked if he plans on staying in the United States. Aiden replied shortly, “I do, yeah I do. Yeah, that’s it.”

I asked why he plans to stay in America and he responds, “Because if I go back to Vietnam, I cannot work. I mean, I can, but I don’t want to. I want a life here because it will be easier for me to succeed. I think every Asian would want to stay here. Maybe not all, but most of them.”

His answer sparked curiosity in me. Therefore, I asked if the life in Asia is hard. He simply says it is. I move on and ask about his living conditions. He stated, “So basically, I live in the basement. The first year I lived in America, I lived with my friends in a dormitory. The reason I want to live alone is important. They stole my money. They took like $800.”

I exclaim, “No way!” in disbelief and he responds, “Yeah, so I don’t talk to them anymore. I couldn’t record it because there was no camera in our room, [so] I had no proof. I moved out and changed to Hudson Catholic High School and I live with my aunt. I live in the basement. It’s not really big, but it’s big enough. I also live with one of my cousins, in the basement.

Finding out he still lives with some family, I asked if he gets along with his cousin. He stated, “Yeah, I do. He is older than me. In the family, I’m the youngest, I’m the baby. So you know when you are the youngest, everyone takes care of me. I don’t like it, they control me. But were I live is okay, it has WiFi.”

Satisfied with his answer, I moved on to the next question. I asked, “ Would you suggest studying abroad to other people?” He answered with an interesting response.

“It’s based on the place. So for example, if my friends in Vietnam asked if they should study in America, I would say yes because I know how it is. If they asked if they should study in Taiwan or something, I would say no because it’s still Asia and it’s easier for them here in America. The only problem is English. My friend’s speak English so bad. I did too until I moved here. I would tell them why not, you have to be curious to learn more. To be smart, you have to be curious.”

I agreed with his last statement and thanked him for letting me interview him. This is an interesting glimpse into the mind and life of a student who is not afraid to push the boundaries for a chance at a better life.