Op-Ed: The Problem With The Regressive Left 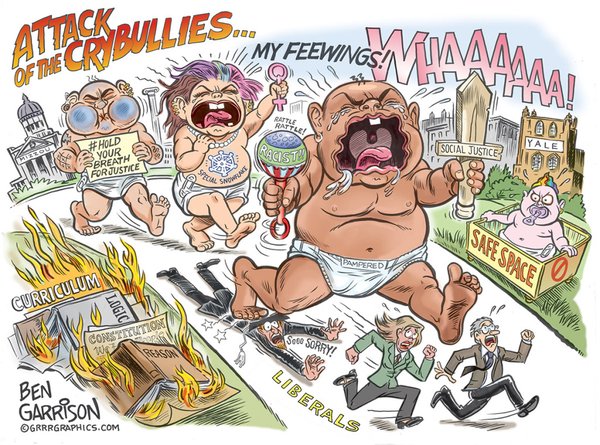 You have probably heard all of these words before online and have been accused of being one of these words even though you were not in the first place. These ad hominem slurs are only a part of the problem when dealing with the political left and leftists.

The “Regressive Left” is a term coined by Secular Muslim reformer, Maajid Newaz, in his book Radical, to describe a certain group of the left that are illiberal yet claim to be progressive. They have gone under several names in the online world, such as Social Justice Warriors, SJW Feminists, Third Wave Feminists, Regressives, PC (Politically Correct) Authoritarians, the Authoritarian Left, Leftists, and as of now, Antifa.

The “Regressive Left” was originally a term applied to a subgroup within left leaning liberals who engage in apologetics for Islamic conservatism and extremism.

At the core, it is ideologically inconsistent with liberal principles. Liberals typically speak out vociferously against illiberal ideas such as homophobia, misogyny, blasphemy laws, etc. when it applies to the majority religion, which would be Christianity in the western world. Some liberals, however, view ideas through a cultural relativistic lens. So when minorities espouse the same illiberal ideas, it is explained away as, “It’s their culture.” Every time there is an act of Islamic terrorism, the response of some liberals (or rather leftists) is to point out that this has nothing to do with Islam, that Western policy is to blame, that minorities are marginalized if their religious ideology is attacked, and that there are right-wing terrorists upon whom there should be an equal focus, and so on.

Most importantly, however, the defining characteristic of a regressive leftist is a deep rooted inability to listen to uncomfortable and contrary viewpoints without dishing out accusations of bigotry, racism, white supremacy, imperialism, Islamophobia, and so on.

Maajid Nawaz, a counter-extremism activist based in the UK, who also happens to be a Muslim, often gets accused of being a lapdog for Western imperialist interests. Maajid Nawaz also co-authored a book with Sam Harris, an atheist and critic of Islam. His collaboration with Harris resulted in some harsh accusations.

Examples of “regressive leftists” include Glenn Greenwald, Reza Aslan, Abby Martin, Cenk Uygur, Chris Hedges, CJ Werlemann, and several others. I think what really turns off many sane liberals on the left about the regressives is the constant lying, smearing, and dishonesty in their dealings. Cenk Uygur, the host of the online progressive liberal YouTube channel and webcast “The Young Turks,” produced a series of videos during and after an incident between him and actor Ben Affleck, attacking his positions on profiling, nuclear first strike, and torture. It is not that he could not make videos disagreeing with Sam. Instead, he essentially labeled Sam Harris a bigot, after having thoroughly misrepresented all of his views.

More recently the label regressive leftist has been extended to those elements on the left who consistently engage in language policing online and on university campuses and seek to shut down honest exchanges of ideas without tossing around accusations of bigotry.

Ironically, it seems like many who latched onto the regressive left label have begun dishing it out like candy to everyone that disagrees with their view i.e. The Alt-Right. Sooner or later, there will be a pushback against this group as well i.e. The Alt-Left.

The first instance of the Regressive Left to the public was on October 3, 2014, on the show Real Time With Bill Maher when actor Ben Affleck accused Bill Maher and Sam Harris, author of Waking Up: A Guide to Spiritually Without Religion, as Islamophobes.

Maher started to interview Sam about his new book, and then Maher said, “Liberals need to stand up for liberal principles … like freedom of speech, freedom to practice any religion you want without fear of violence, freedom to leave a religion, equality for women, equality for minorities, including homosexuals. These are liberal principles that liberals applaud for. But then when you say, ‘In the Muslim world, this is what’s lacking,’ then they get upset.”

Harris added, “Liberals have really failed on the topic of theocracy. They’ll criticize white theocracy. They’ll criticize Christians. They’ll still get agitated over the abortion clinic bombing that happened in 1984. But when you want to talk about the treatment of women and homosexuals and freethinkers and public intellectuals in the Muslim world, I would argue that liberals have failed us…. The crucial point of confusion is that we have been sold this meme of Islamophobia, where every criticism of the doctrine of Islam gets conflated with bigotry towards Muslims as people. That’s intellectually ridiculous.”

Affleck, who reminded the audience of where our rights come from (the “forefathers), called this analysis “racist.” He sniffed, “Are you the person who understands the officially codified doctrine of Islam? You’re the interpreter of that?”

Harris agreed that not all Muslims are dangerous. He continued, “Just imagine some concentric circles. … At the center, you have jihadists. These are people who wake up in the morning wanting to kill apostates, wanting to die trying. They believe in paradise; they believe in martyrdom. Outside of them, we have Islamists; these are people who are just as convinced of martyrdom and paradise and wanting to foist their religion on the rest of humanity, but they want to work within the system. They’re not going to blow themselves up on a bus. They want to change governments. They want to use democracy against itself. Those two circles arguably are 20 percent of the Muslim world. … But outside of that circle you have conservative Muslims who can honestly look at ISIS and say, ‘that does not represent us; we’re horrified by that.’ But they hold views about human rights, and about women and about homosexuals that are deeply troubling.”

This is a prime example of the problem with these pseudo-liberals who are just regressive: if they hear anything they disagree with, they will resort to using ad hominem slurs, which is just false accusations, against the person’s argument, whether they’re liberal or conservative.

Spinning Its Way To The Top