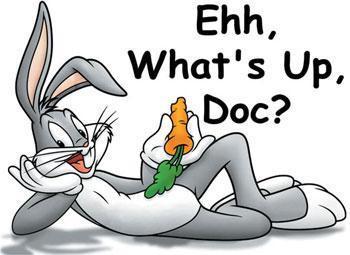 Bugs Bunny has to have one of the most complicated and fascinating origins of any character of all time.

Bugs doesn’t have a specific creator, he was created by multiple artists. Unlike the rest of the Looney Tunes characters, he does not have a definitive origin.

One of the earliest creations of a Bugs Bunny-like character was in the 1938 short “Porky’s Hare Hunt,” which was a direct remake of Tex Avery’s “Porky’s Duck Hunt,” a toon that first introduced Daffy Duck. The Bugs Bunny prototype was a reskinned version of Daffy.

The name “Bugs Bunny” came up in a scribble model sheet as “Bugs’ Bunny” by Charlie Thorson in 1939. This was in reference to Ben “Bugs” Hardaway, the director of “Porky’s Hare Hunt.” He is one of several artists that was involved in making the wisecracking rabbit we know today.

Then, in 1940, the character was handed to Tex Avery, Bob Givens, and Mel Blanc. These people would shape the attitude and personality of Bugs.

He would continue getting more tweaks from artist like Friz Freleng, Bob Clampett, and Chuck Jones. They would also refine his traits, shaping what would become one of the most iconic characters of all time.

In October We Wear Pink