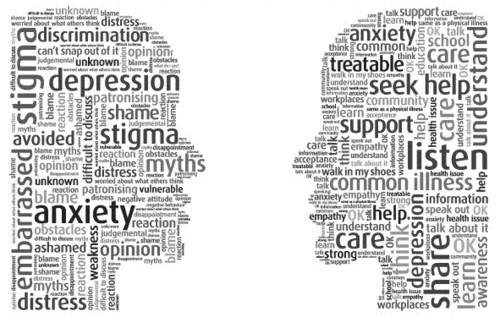 Mental Illness Awareness Week is observed annually, during the first week of October.

This event is a good way to draw attention to mental illnesses that affect the majority of people living in the United States and the world. Mental illness is a topic that often gets overlooked by many. The importance of mental health awareness week is for people to have better understanding of what mental illness really is.

According to the World Health Organization, nearly two-thirds of people with a known mental disorder never seek help from a health professional. Neglect and discrimination prevent people with mental disorders to get care and proper treatment.

Some of the most common mental health disorders are depression, bipolar disorder, schizophrenia, and obsessive-compulsive disorder.

Mental Disorders by Definition and Numbers:

Depression is a mood disorder that causes a persistent feeling of sadness and loss of interest. It affects more than 300 million people worldwide. Nearly 800 thousand people die due to suicide every year, and it is the second leading cause of death in 15-29 year olds.

Bipolar Disorder is a mental health condition that causes extreme mood swings that include emotional highs and lows. It affects about 60 million people worldwide.

Schizophrenia involves a range of problems with thinking/cognition, behavior or emotions (delusions, hallucinations or disorganized speech and reflect an impaired ability to function) and affects 21 million people worldwide.

Obsessive-Compulsive Disorder (OCD) features a pattern of unreasonable thoughts and fears (obsessions) that lead the sufferer to do repetitive behaviors (compulsions). This affects 1 in 40 adults and 1 in 100 children in the United States.