The Star Behind The Ball 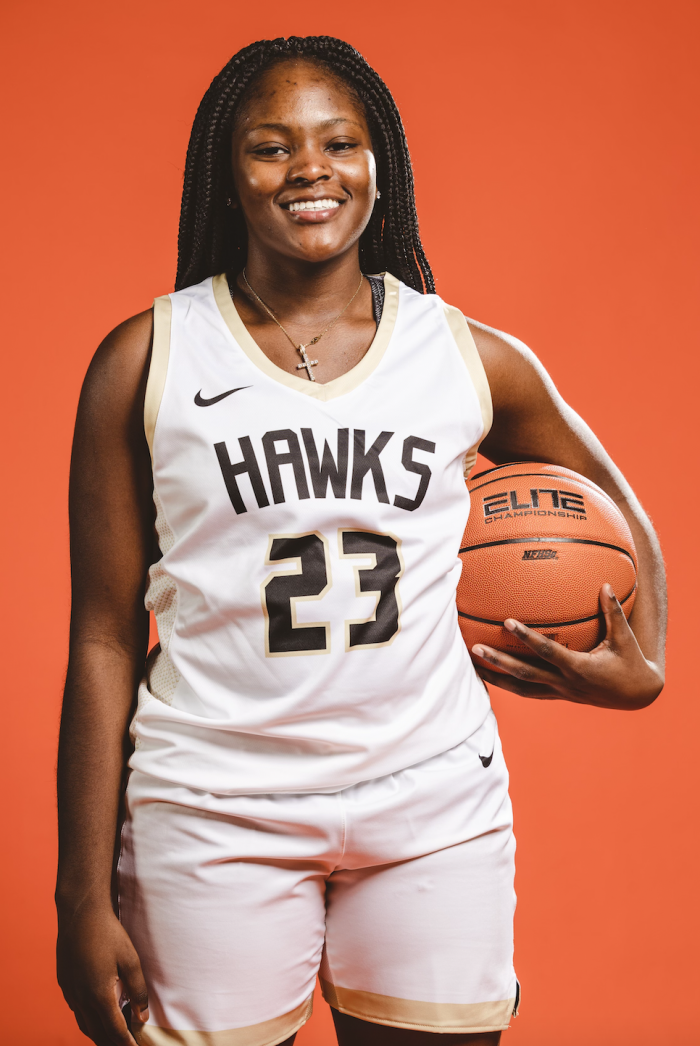 By: Rebecca Holder and Sheila Perez

All-time basketball star Kayla Beckford feels bittersweet as she counts her days left at Hudson Catholic. Since the young age of six, she has intensely trained and worked her way to become a star player. While playing for the Amateur Athletic Union (AAU), Beckford began playing for Hudson Catholic in 2018. She was a part of the team when Hudson Catholic Girl’s Basketball team won the county champs in her first year.

Being out for current games because of her injury, Beckford still goes for practice and games in order to support her teammates. Despite taking a toll on her basketball career, her injury does not hold her back. “[While] It only negatively impacts my team, as I am a senior and the captain, it does not really affect my team that much because I still try to attend with them during practice, games, team events as much as I can. Even though I’m not in the court with them, I still encourage and speak to them as if I’m still playing,” Beckford says.

Though Beckford is still trying to navigate if she wants to continue playing after high school, part of her also wants to focus on college and figure out the career that she wants to do. “As of right now, I don’t really want to play in college. I want to focus on myself, my career, and try to figure out who I am outside of basketball”, Beckford added.

Being a student-athlete is not easy; it takes a lot of commitment and time management, but Beckford has it down. “Balancing my social life, school, and basketball is difficult but the thing that helps me the most is trying to do as much homework as I can after school and after practice I won’t have as much homework. Having a social life comes with time, on the weekends or if I have an off day, that’s how I try to go out and keep a balance between my work and my social life”, Beckford explained.

In basketball, a lot of time needs to be dedicated to it, Beckford explains. “Coming off an injury, I wasn’t practicing as much nor as hard. I would still try to participate in all the drills and standard practice. The whole practice usually takes about two and a half hours”.

Beckford has her ritual pre and after game to be amped up. “My team and I pray before a game and right after. We also would talk about what we want to do in the game,” Beckford says. “After any game,  we usually have post game talk with all our coaches and when the coaches leave, we would have a discussion with just the team about how we think we played and what we can do next time. If we win, I usually celebrate by listening to music, have a good meal, and have a long shower and rest for the night. However, if we do lose, I still listen to music but a bit more calm music. I would still have a good meal and good shower,” Beckford added.

It is good to have time for yourself to unwind and rest with the amount of commitment put in. Beckford does it by “usually [doing] things that take [her] mind off of things, like hanging out with friends, going out with family, or watching Netflix or YouTube. Especially sleep, it’s usually things that are pretty chill”.

Though this year is pretty hard for her, she expertly made 62 points for this season so far, with more when she comes back to the court. Beckford is the definition of a student-athlete. Since her first year, the Hawk’s Nest has loved her due to her dedication and hard work, on and off the court. She kept her grades up and was in the 1st honor roll since she started school at Hudson Catholic. “She is a very important part of our team. She’s been in the program for four years and she was part of the county championships that the girls won when she was a freshman. As the years progressed, so did she. Kayla is the definition of a student athlete. She’s great in the classroom and great on the court. Her work ethic is tremendous. She is a pleasure to have in class. She is very coachable on the basketball court and a good person. I wish her the best, it’s a tough year for her with the injury, but she’s a huge part of our team. She’s a great leader,” Coach Romano said.