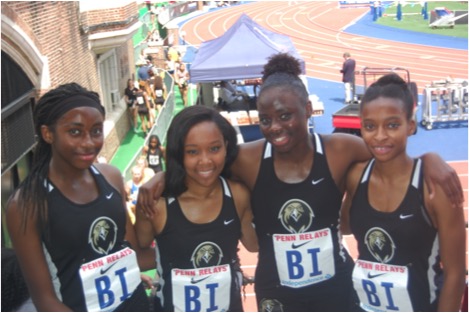 The Hudson Catholic Hawks were honored to participate in 168th Penn Relays Carnival. Penn Relays is the largest and oldest track and field meet in the world. The meet is held in Franklin Field, Philadelphia, and lasts Thursday through Sunday. Athletes on the high school, college, and professional level took part in events such as the 4×400, 4×200, 4×800, and 4×100 meter races.

The Lady Hawks ran on Thursday, April 27, 2017, with 9 other teams in the 4×400 meter relay. The Hawks took 5th overall, but saw two new personal bests including Weeshamar Senatus, a sophomore running 61.7 as the second leg of the race.

The boys ran at 9:35 on Saturday, placing 6th in their heat. The relays team consisted of seniors Courtney Johnson, Tsulufelo Scrivens, and William Sparks-Newsome, as well as junior Quinn Kieselowsky. For Johnson, Scrivens, and Sparks-Newsome, this will be the last time attending Penn Relays as high school students.

Although the Hawks didn’t place as well as they usually do, it is still an wonderful honor to participate in the oldest track meet in the world.

A Night of Honor