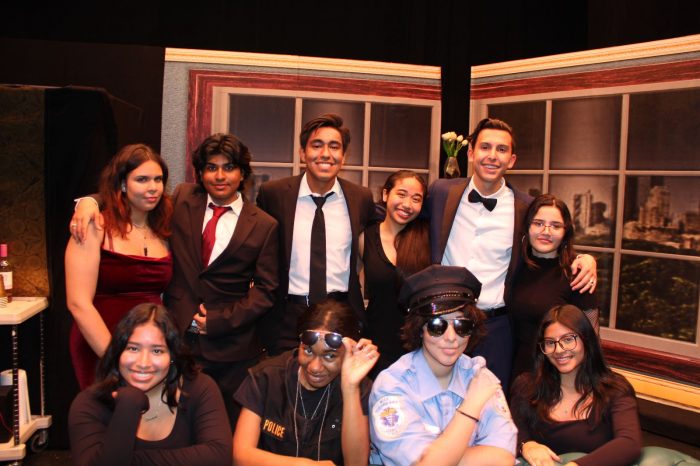 Rumors had its first Broadway premiere on November 17, 1988, after previously opening at the Old Globe Theatre in San Diego on September 22, 1988. The play was directed by Gene Saks and was based in Snedens Landing, New York, where the farce begins with the Deputy Mayor of New York who had just shot himself. Rumors is a comedy that has something for everyone.

“The show is all about 4 couples trying to save their good friend from getting in trouble with the police,” says Mariano Padilla, a senior at Hudson Catholic and one of the show’s leads, “However, they run into many different problems while doing so. Rumors is a comedy that has something for everyone, it has jokes, music, dancing and so much more.”

As an aspiring actor, Mariano must perform at any chance he gets. Whether it be a musical or a comedy, he is always up for a challenge. When he was cast as Ken Gorman, Mariano knew there was work to do and felt very determined to prepare to put on the best performance he could give.

When asked about his strengths, Mariano mentioned his confidence and presence on and off stage, which he believes sets him apart from other actors. As for his weaknesses, he feels there is always room for improvement. This mindset helps him to remain humble and focused.

The rehearsals themselves were stressful for all who had to endure them, making balance a theme in dramatics. In the end, the cast and production got through all of their rough patches and tightened up in time to perform.

As the room lights dimmed, you could feel the scene coming to life behind the curtain. In theater, they have a philosophy of using drama itself to create a setting and here this could be seen through the main motif of a blue couch. I was glued to my seat for 30 minutes, so wrapped up in the world of Rumors I forgot the people on stage were actors at all. The talent shown onstage was something Hudson Catholic students and attendees alike could clearly sense. The show was immersive and detailed along with cast chemistry like no other. I felt many emotions – fear, drama, and a constant laugh. It’s honest humor and the actors seemed as if there wasn’t a script at all.

Overall, it was an amazing experience. While the plot’s big secret in Rumors wasn’t safe for long, everyone they told swore they wouldn’t tell.

Keep your eyes open for information on Hudson Catholic’s Spring presentation of Chicago, because you won’t want to miss it!