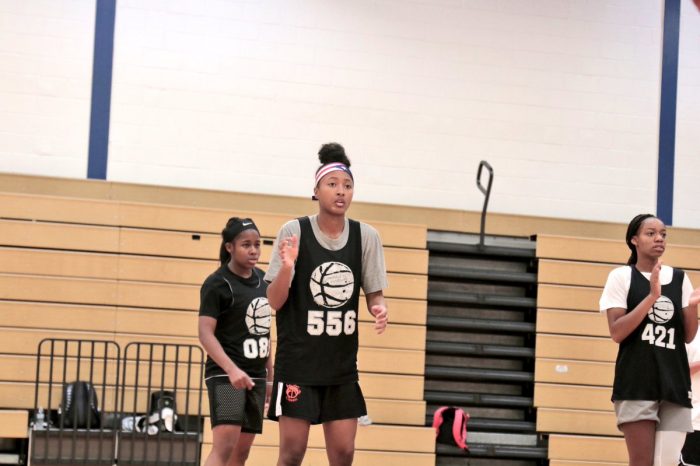 The junior guard, Soraya Ortiz, is one unique player for the Hudson Catholic Lady Hawks Basketball Team. Averaging 8 points a game, and playing for about 20 minutes, she’s a fierce competitor who’s in love with the sport.

Soraya is known to be a great defender, shooter, and team player. Ortiz believes she made the right decision when it came to choosing which high school she wanted to attend. “Well, it took me a minute to decide what school I actually wanted to go to, but Hudson was the only school that made me feel at home,” said the junior. “The team was just so welcoming, and it felt like I’ve known everyone for years upon years. Haylee Ramirez was another reason I chose Hudson. We played together for a little while before I decided to go, she talked to me about it, and she welcomed me to the team along with everyone else.”

In Ortiz’s freshman year, she was elated about how it went. “My freshman year was the best year of my whole basketball career,” said Ortiz. “We won counties, we did everything together. My very first high school game was so nerve racking but the whole team was supportive and I knew they had my back. I experienced so many different emotions, feelings, and more. I had bad games, but I never let that get over my head.”

If time could be done over again, Soraya would repeat her freshman year. If I could do freshman year all over again, I would,” the junior explained. “I feel as though I could have accomplished so much more, and the stuff that I know now, would be so useful. I would go about things totally different.”

With all the great feeling, good experiences, and success Soraya has had, unfortunately she had a downfall and was set back. Ortiz began to explain her injury stating, “At the end of my freshman year, beginning of my sophomore year, I was playing in a regular game and I tore my ACL. Me, being me, I didn’t think it was anything I had to worry about because I felt fine after an hour. I went to the hospital, and the doctors said all I did was sprained my knee and that it was locked. I was so happy to hear that it was nothing serious and I didn’t have to sit out for a long time. I started to get nervous after a couple days because something didn’t feel right in my knee and I knew my body. I went to an orthopedist and they told me I tore my ACL. I was devastated.”

The injury Ortiz encountered took a toll on the junior, both mentally and physically. Knowing that what she went through made her upset, she continued to express her emotions. “I didn’t want to play basketball anymore, I didn’t want to talk to anyone and I didn’t want to go anywhere. It took me a couple months to get out that slump and start getting back into the groove of things. Before I knew it I was back on the court in August and I was so happy to be back with my team.”

Despite Soraya’s hardships, she knows she’s become a stronger person that made her who she is now. “I feel like they made me into the person I am today because everything that I’ve been through in life made me stronger,” said Ortiz. “I always go through life with this saying: ‘God gives his toughest battles to his strongest soldiers.’”

People are placed in situations that are sometimes hard to deal with. Soraya stated the advice she would tell someone if they were in her position. “If someone was in my exact situation, I would tell them not to let anyone or anything bring you down, you were built for this lifestyle. You’re your biggest critic. Don’t let people tell you what you want to do with your life. Don’t let anyone tell you that you can’t do something you put your mind to.”