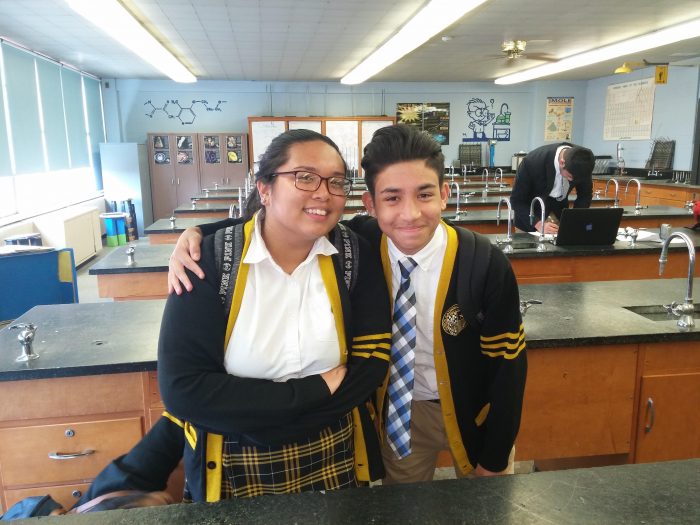 In a very rare interview, The Commentator had a chance to speak with two of the brightest students in the graduating class of 2017, Kayla Santos and Matthew Hernandez.

When asked about their favorite subjects Hernandez said, “I had a lot of fun in Chemistry and I enjoyed Calculus.” Similarly, Kayla said, “My favorite subject is AP Chemistry.” This reporter, also a member of AP Chemistry, would say that these are understatements.

The Commentator also asked which teacher in their entire four years of high school influenced them the most, and to no surprise it was Mr. Marmora.

The Commentator then proceeded to ask this “couple” what they think of Hudson Catholic in one word before they formally end their last school year.

Without any hesitations Hernandez said, “family.” It took a while for Santos, but she ended up saying, “amazing.”

And what about that famous “promposal”?

“I went to go buy some stuff, flowers and a box of chocolates, and then I went back to Mrs. McGady’s and went down on one knee and I asked Kayla to prom. ‘Will you go to prom with me?,’ Hernandez remembers asking.

Luckily for Hernandez, Santos did say yes and they would both go on to have a great time at their prom.

Although they are going to attend different colleges, they will both do their best to stay as close as possible.

“I’m uncertain of what will happen, but we might be closer even though we’ll be apart in the future. Anything could happen,” Hernandez said.

What’s The Deal With Memorial Day?