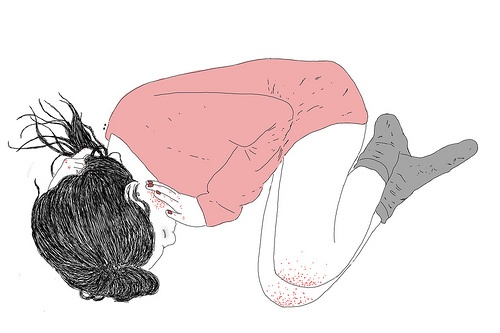 EDITOR’S NOTE: The following piece involves references to suicide that some may find upsetting or triggering. If you or anyone you know needs help, please reach out to the National Suicide Prevention Hotline, 1-800-273-8255.

She hates her sister’s curtains, she decides, covering her face with her sister’s plush floral blanket to cover her face from the light. Ainhoa had been recovering from a manic episode, that ended her up in the hospital with new scars on her legs. She knew those would scar when she was sitting on that bed with the doctor having to hold her down to the bed. She didn’t mean to scratch at that scab, but it was a warning sign, apparently. She tried not speaking to her siblings. Camila would always spam her with texts and sometimes show up unannounced. She was still on her emergency contact list, and Camila had taken her home with tears in her eyes and Dima at her side.

She was sleeping in their guest room, unofficially their grey cat’s room, a Russian blue, which she had found ironic. The cat’s name was Sir Silver Mint, since neither of them would back down from their chosen name. The cat was nice, at least, cuddling up to her in the middle of the night through the days of her depressive episode that crashed right after the manic one. She’d spend days with her face wet while Silver would purr and press his face against her tear-stained one.

“Ainhoa?” she realizes her sister has been in the doorway this entire time. Camila has a mug in her hands, and sets it down on the nightstand next to the bed. “How’re you feeling?”

Her voice is gentle, and Ainhoa hates it so much, how soft she’s talking like Ainhoa will crack if she speaks a little too loud. But Camila’s always like that, her voice melodious and gentle.

Camila nods, moving Ainhoa’s hair behind her ear, and she distantly thinks that she should re-dye her roots. Camila had always thought the pink was cute, and Ainhoa couldn’t separate herself from her pink hair. “Okay, but if you need anything, you’ll let me know right?”

She’s faking a glare, and Ainhoa suddenly feels the guilt burst like a balloon in her chest. She nods, moving slightly so Camila can’t see the way her eyes are tearing up. God, why couldn’t she just be grateful for her sister taking her into her own home after a manic episode? Camila could have just taken Ainhoa back to her own apartment to spend her depressive episode alone.

“Lo siento,” she whispers, her voice rough from no usage.

“No ser, hermana,” Camila says as she kisses her forehead. “Te quiero.”

“Me too,” Ainhoa lets herself cry in front of her sister, pressing her face into Camila’s chest.

Camila leaves after Ainhoa gets herself out of bed, and Ainhoa fumbles with her stuff. Camila made sure to give her a squeezing hug before she left for work, and Ainhoa locks the door behind her when she leaves. Time to head back to my lame apartment complex, she huffs.

Maximus sighs, running a hand down his face while he turns his car on. He turns the radio on and blasts the music. He wants to drain the intrusive thoughts out with some pop singer (who would break up with her newlywed husband two weeks into their marriage) to scream out her bland lyrics over his brain.

He hears a knock on his window and turns over to look at who’s interrupting his me-time. Of course, he internally groans when he realizes it’s his brother. Maximus rolls the window down, and Vivek pops his head into the car.

“Where you going?” Vivek asks, and Maximus can’t help himself from sighing. He knows it’s because Maximus had a colossal breakdown that ended him in a rehabilitation center. Vivek drove him there himself, and he just checked himself out a few days ago. His family was on edge for those days, and he understood, but it irritated him at the same time.

“Home.” Maximus tells him blandly, “You know, where I live?”

“Obviously I’d be careful. I don’t wanna end up back in an institution,” Maximus snaps bitterly but shuts his mouth upon seeing Vivek’s face. “Sorry.”

“It’s whatever. I’ll see you later, alright?” He pats the roof of his brothers car and waves at Maximus when he starts his car back up and is pulling out of their parents’ massive garage.

Well, that couldn’t have gone any better, Maximus thinks. He pulls up to the apartment he lives in with food he brought from the nearby Indian place, more than usual since he had a feeling he wouldn’t be going out much, and unlocks the door. He sees a girl running up the stairs with a bag, her hair a soft pink that he’s seen around. It’s her: bubblegum girl. That’s what Maximus thought about when seeing her wait for the elevator while blowing small bubbles of pink gum. Her hair was almost the same color, and Maximus ended up staring at her the entire time. She didn’t seem to notice, tapping away at her phone on some cat game. Her hair didn’t match her outfit, with her white turtleneck, high waisted black pants and matching black boots. It kind of fit her, he had thought. He’s seen her around a lot, to the point he started calling her bubblegum girl in his head.

He guessed she was new, because he realized she was his neighbor when she stopped at the same floor and was following Maximus to the same door. Maximus was kind of disappointed when he realized she was just walking home, and really never noticed him, when it was the opposite for him that day. He doubts she even knows he exists, he just awkwardly stares at her when she’s near while she’s distracted. He once helped her when she dropped her purse, and she gave him a small “Thanks.” Maximus was pathetically glowing the rest of the day. Listen, he didn’t have a lot of happy encounters in the past few months.

He takes the elevator, even though a part of him wanted to take the stairs to offer help. He then realized he had bags of food in his hand, so he just took the elevator instead. He hears the ding of the elevator and quickly slides out of the elevator. He sees her struggling to find the right key to her door, and he places his food outside of his door.

“Hey, uh, do you need some help?” Maximus asks, and she practically swerves around to look at him.

“No,” she replies, her voice sharp, but obviously still struggling. Maximus turns around, planning to head back, but turns back around. He scoops up the bag she was carrying, side-eyeing his food carefully.

“Oi,” she blurts, but seems to look defeated and just goes back to figuring out which key fits. The lock clicks with a key that’s messily marked with nail polish, and she snatches her bags back. “Thanks, stalker.”

She purses her lips. “You’re always looking at me when we’re in the elevator together, plus you live next to me? It’s like a horror movie waiting to happen.”

“Damn,” he raises his hands up in surrender, “you caught me. I’ve been planning to eat you for a few weeks now. Thought the pink hair would add some flavor.”

She’s fighting back a smile and rolls her eyes. “It’s all bleach. It’ll kill you before you eat the rest of me.”

“Maximus,” he says, sticking his hand out. She takes it, squeezing a little too hard for his comfort, but he guesses it might be deserved for all the staring.

Ainhoa bites her lip, staring the guy up and down. She’s noticed him before, obviously, he isn’t subtle in the way he kept trying to start a conversation, but would miserably fail and sulk quietly in the corner of the elevator. She acted like she didn’t notice, but it would get harder with the way he’d get surprised when she was conveniently always in the elevator at the same time. So what she might have started to eat her breakfast faster so she’d see him in the elevator more often? It was not her fault she liked the attention from someone who had no knowledge about her personally.

“Nice to meet you, Ainhoa,” he smiles at her, and the inside of her lip starts hurting from how hard she’s biting.

Ainhoa had plans today, dammit. She had written out something, or rather rewritten letters and letters she had typed as a teenager when a day would become way too much. She never sent them, horrified she’d traumatize her siblings and make them like her. But she had been planning it for a while, the crash of her depressive episode after the mania just made her realize she had to do it. She wrote one for Camila and Manuel, her older sister and her younger brother that she adored but had to leave, and one for her parents, individually. She internally decided to let herself make conversation with Maximus, since it’d be a shame if she didn’t. Ainhoa would probably be a cold body in a few hours, vomiting her guts before she’d regret it.

Camila had a bottle of Drano that Ainhoa had stared at for a few minutes when she was rummaging for her toothbrush. Ainhoa had to hold back from doing it right there, but she guesses she didn’t want Camila to come home with her eyes glassy, wide open and blood on her stupid grandma carpet that their mom gave them as a home warming gift. Camila would never forgive herself if it was in her own house. She would if it was in Ainhoa’s own home, where her door was locked shut and she’d shut her phone off for days after she scheduled her texts to send.

She has the Drano in her bag. It’s ready and she was going to do it as soon as she got home. It was heavy though, she underestimated her strength. Maximus helping her put a (temporary) setback in her plan.

“Do you… want some curry?” He asks, breaking the silence, now equipped with bags of food. Ainhoa could tell him no, she could go inside and chug that bottle and have it be over with.

“Are you dumb?” she responds. “You’re just gonna walk into a stranger’s home with food? You know I could just knock you out with a bat and take your food?”

Maximus shrugs like there’s nothing he could lose in that situation, and it makes Ainhoa’s nerves jump. The Drano bottle in her bag felt heavy in her hands, yet Maximus easily held the bag. She looks at the plastic bags that are probably filled with Tupperware of mediocre curry. She turns her phone back on.

What was one more night?