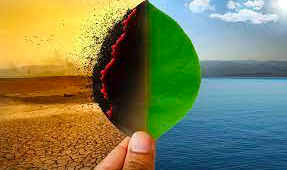 The fashion industry is one riddled with vulnerabilities, whether it be exploitation of poor economies, or supply chain disruption.

Logistics of clothing is one of the largest pools of money; but like a lot of modern industries, they are not very well sustainable for the future of the world.

Fast fashion contributes to the global climate epidemic, one that can destroy habitable places and run the world’s clock down faster.

The first glaring issue that is most prevalent in the argument of the ethics of the fashion industry.

The way fashion is even able to sustain itself is with cheap labor from sweatshops in underdeveloped countries.

That is already the first and most alarming part of the chain. Underpaid workers, poor labor conditions, and a lack of waste management also makes for terrible environmental effects.

“Clothing production is the third biggest manufacturing industry after the automotive and technology industries. Textile production contributes more to climate change than international aviation and shipping combined,” according to the House of Common Environmental Audit Committee, 2019.

Climate change can be attributed not only at the manufacturing stage, but also at the end of its life after it has been worn for its short lifespan.

Harmful chemicals are released into the air and into the water and destroy the environment around the factories.

However, after its short term use, it is disposed of and thrown into landfills where it contributes to global pollution.

Clothing also takes around 200 years to decompose, and produce carbon dioxide, methane, and other toxic dyes and chemicals into landfills.

Additionally, textile creates a number of other waste products that are difficult to reuse, or impossible to altogether.

“Among the environmental impacts of fast fashion include the depletion of non-renewable sources, emission of greenhouse gases and the use of massive amounts of water and energy. The fashion industry is the second largest consumer industry of water, requiring about 700 gallons to produce one cotton shirt and 2,000 gallons of water to produce a pair of jeans,” says UNEP (UN Environmental Programme).

With the fashion industry producing all these harmful byproducts, it’s no shock that fast fashion has seen its fair share of criticism.

The actions of both manufacturers and consumers have been detrimental on the earth’s health.

We have to start making changes in which consumers interact with clothing, such as wearing clothes out longer or not partaking in fast fashion trends.

With consumer intervention, manufacturers would have to make changes that can in turn, lessen the blow that fast fashion creates to the issue that climate change presents.

Op-Ed: Let’s Not Move On