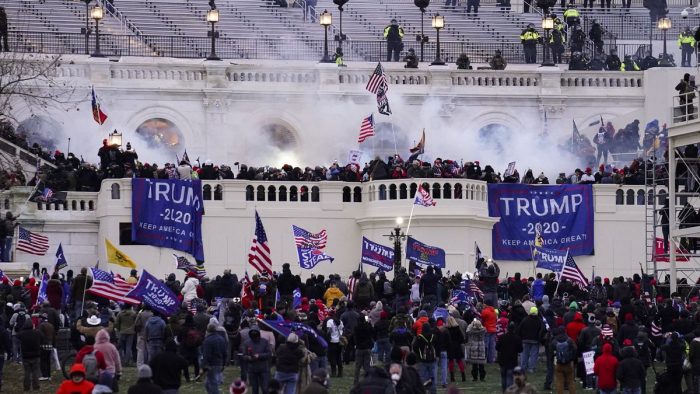 How do authority figures decide whether they should tear gas a person or let them walk free? It’s quite simple actually: if they are peacefully protesting for their rights, America’s “blue lives” will see it as a clear answer to tear gas these innocent people, while white supremacists can walk into the Capitol without any hassle. Frankly, if these people had a different skin color, they would not have even made it onto the first staircase.

There is a distinct difference between how President Trump treats the Black Lives Matter protestors and how he treats his “Proud Boys.” As an American, I feel it is unacceptable to see the President use fear to rule this country, let alone any country. White privilege wasn’t anything new to America but it was eye opening as the whole country watched Trump supporters terrorize the U.S. Capitol on January 6, 2021, and they had little to no struggle doing so. They were only dividing the country more, yet where was the tear gas? Where were the police they so proudly defend? Where were the rubber bullets?

On May 29, 2020, President Trump went on twitter and took it upon himself to refer to the BLM protestors as “THUGS” and continued on to say, “When the looting starts, the shooting starts.” But then he tweets, “I am asking for everyone at the U.S. Capitol to remain peaceful. No violence!” after the rioting had begun.

The difference in tone and intention of these tweets speak volumes of his character and the respect he has for this country. This riot was not two or three days in the making but was four years in the making during the time of his presidential term. None of us woke up and suddenly realized he was a dangerous leader for our people. We all already knew. This “leader” motivated a violent crowd to deliberately break into a federal building and tried to cover it up by insisting that he is all for peace and unity.

America consists of two different systems of justice: one that allows the behavior of rampaging through U.S. Capitol waving confederate flags and damaging not only the property, but also the image of America to its citizens and the rest of the world; the other brutalizes protestors, tear gasses teens, makes people lose their eyes due to rubber bullets just because they want to stand up for their rights.

President Trump has either fueled his supporters with a sense of false pride or the sense of entitlement to justify their actions. He has done little to nothing to help unite the United States. We, as a country, must overlook the title of Democrat or Republican in this situation because in this case, equality should not be political. It’s moral, the same as treating one another with respect. Once all of us realize this, the quicker the healing will begin.

Getting to Know Senior Justin Vilomar